Certain publicly bid and awarded contracts have to be approved by the New York Office of the State Comptroller (OCS).  In those instances where you want to protest an OCS award, the Comptroller’s office has established procedures to be followed. 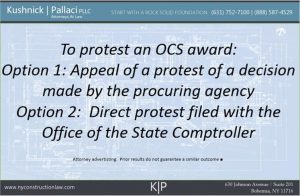 Generally, there are two types of protests that you can file with the Comptroller when you want to protest an OCS award.   One is an appeal of a protest of a decision made by the procuring agency.   The other is a direct protest filed with the Comptroller’s office.

Any interested party (such as another contractor that bid on the contract and lost) may appeal the contract award and the agency’s determination by filing a written protest with the Comptroller within ten (10) business days of its receipt of the agency protest determination.  While the Comptroller can waive the ten (10) day requirement, we never suggest being a test case.  The written appeal must be served on the contracting agency, the successful bidder and any other party that participated in the protest to the agency.

Direct Protest to the Comptroller

To read the Comptroller’s detailed procedures you can click here.