How long does a mechanic’s lien last?

A mechanic’s lien is valid for a period of one year from recording.

How do I extend a mechanic’s lien on a single family dwelling?

To extend a mechanic’s lien on a single family dwelling you must obtain a court order.  While the law is not crystal clear on the subject, there is case law that says as long as the motion to extend is filed before extension then the lien extension request is timely. 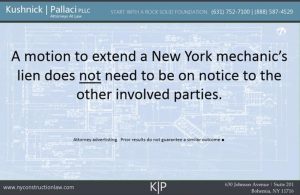 A lien on real property improved or to be improved with a single family dwelling may only be extended by an order of a court of record, or a judge or justice thereof.  No lien shall be continued by court order for more than one year from the granting thereof, but a new order and entry may be made in each of two successive years.

How do I extend any other private improvement mechanic’s lien?

If the lien was not recorded against a single family dwelling then it may be extended by simply filing an extension with the County Clerk.   Pursuant to Lien Law Section 17:

Do I have to extend a mechanic’s lien if I have started a foreclosure action?

If a foreclosure action has been commenced to enforce a mechanic’s lien before the lien expires, and a Notice of Pendency has been timely filed, then no extension needs to be filed.  Pursuant to Lien Law Section 17:

What if another lienor has filed a foreclosure action and named me as a party?

If there are multiple liens on the same property then Lien Law Section 44 will require the other lienors to be named as defendants in a foreclosure action to enforce any one lien.   If the plaintiff in that action files a notice of pendency then the liens of the others that have been named in the foreclosure action are also automatically extended for the life of the Notice of Pendency.  Pursuant to Lien Law Section 17:

How do I extend a public improvement lien?

A mechanic’s lien on account of public improvement can also be extended by either filing an extension of commencing a foreclosure action and filing a notice of pendency.  Pursuant to Lien Law Section 18:

Should I let my neighbor perform underpinning?

What is underpinning? Underpinning is the process of installing a new “foundation” under your existing foundation as a means of structural support. It is typically

Need Help With a Legal Issue?

From contracts, to payment application disputes to construction defect claims we can help.  We can often assess your situation and your options during a free initial consultation. Contact us at (631) 752-7100 or (212) 752-7155 to schedule an appointment or contact us via the web by clicking here.

Prior results do not guarantee a similar outcome.