If you are in the construction industry in New York then chances are that at some point in time you have either asked for a “lien release” or “lien waiver” or been asked to sign one of these documents.  But do you take the time to actually read the lien release/waiver to see what it is?  If not, you should – all releases and waivers are not created equally. 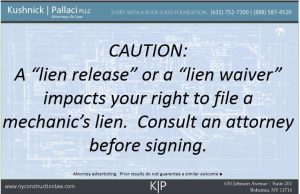 Consult an attorney before signing a Lien Release or Lien Waiver

The first thing you should do is read the release or waiver.  Specifically, look for the following:

A partial lien waiver or partial lien release means that you have received a partial payment, or are receiving a partial payment, and that you waive the right to file a mechanic’s lien for that particular portion of the labor or materials that you provided as identified in the lien waiver/release.  Determining whether the lien release/waiver that you are signing is a final or partial lien waiver/release can sometimes be difficult.  Often the document will have a title as either “Partial Lien Waiver” or “Final Lien Waiver” but, even if it does, read it.  Regardless of the title, make sure that the document actually says that you are doing what you think you are doing.  If it is final, that is what the release should say.  If it is partial, it should say that.

An important tip, which seems self evident, is to make sure that you actually are paid before you sign the release.  In almost all instances the lien release or the lien waiver says that you are acknowledging receipt of payment and are waiving your right to file a mechanic’s lien.  If you have not been paid and the release is not conditional then don’t sign it!  Now, of course there are situations where payment will not be released until you sign and provide the lien waiver. A simultaneous exchange is acceptable.  You hand the lien waiver to the person that is paying you and they in turn hand you a check.  Simple enough.

One final note, remember that in New York, a pre-lien waiver is void against public policy.  That means that when you start the project nobody can require you to waive your right to file a mechanic’s lien before you actually provide the labor and materials.  If they do, the waiver is void and is not enforceable.  That does not mean you should sign the pre-lien waiver anyway.  Explain that the lien waiver/release is void and that you will not waive your right to file a mechanic’s lien until you are paid for your services. Knowing your legal rights is a critical component to the contract negotiation phase.

Even though lien releases and lien waivers are common in the construction industry, they are still important legal documents.  As with any legal documents, we strongly suggest that you consult with legal counsel before signing a mechanic’s lien waiver or a mechanic’s lien release.  Often it only takes a few minutes for an experienced construction attorney to review the waiver, make any necessary changes and get it back to you.  The small cost for the review can save you a lot of time and money down the line.  The experienced construction attorneys at Kushnick Pallaci often review and prepare lien releases and lien waivers to protect their clients’ interests.  Contract us here to discuss your next lien waiver or lien release.